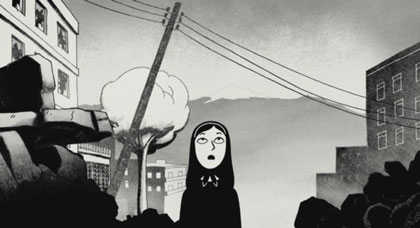 After a very busy weekend, I sat down to watch late on Sunday night an extraordinary animated film, Persepolis, based on the picture novels by Marjane Satrapi. The story follows Marjane from a young girl to a young woman with the backdrop of the fall of the Shah in Iran and the rise of Islamic rule.

In this day and age with Iran very much on our minds in terms of foreign policy, possible nuclear weapons, and particularly the concerns about what a future American president might do with respect to Iran (candidate John McCain has made no secret of his willingness to bomb Iran), it is perhaps not surprising that the view of Iran we are fed is one of extremism and radicalisation.

The film is fascinating as it shows us what I am sure most of us know already, that Iranian people are just like us. They are trying to make successful lives for themselves, they are looking out for their children, families and friends, and trying to live "normal" lives even while the rulers of their country descend into fundamentalism. Persepolis is clear about the dangers of fundamentalism and the utter hypocrisy of it. In one scene Marjane is castigated by two men as she runs home. They tell her not to run as her rear end is jiggling provocatively. Marjane screams at them, "Then don't look!"

It is a wonderful touching film, the animation (mostly in black and white) is somehow both simplistic and yet also powerfully direct. It is no wonder that this film was nominated for an Oscar this year.

If you get a chance, do make time to watch Persepolis.

We have 288 guests and no members online