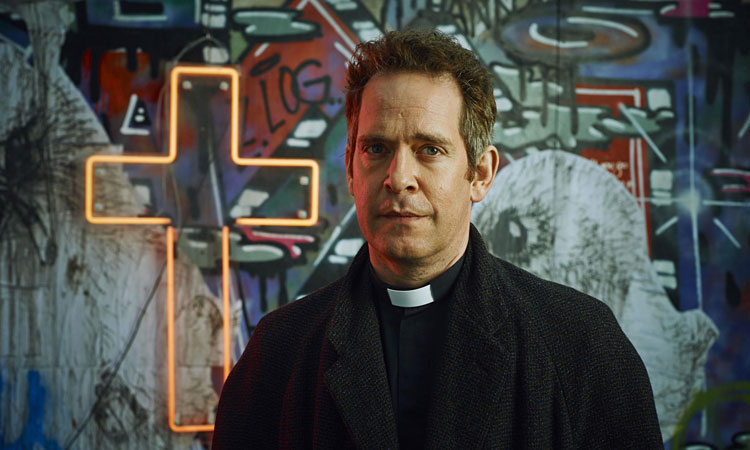 I watched, as no doubt many of us did, the final episode of the third series of Rev last night. I'd seen the previous two episodes back to back the night before. In the best traditions of British TV, it would appear that the makers of this unlikely sitcom are going to stop while they are ahead (think also of Fawlty Towers, The Office). There is part of me that would like to see more, but there is another part of me that thinks it was a perfect, messy place to cry "It is finished!"

When watching the first series my abiding memory, which has remained to today, was "how did this get made?" Not because it was so bad, but rather because it was so very good and, in my experience, very real. I know many of my colleagues in ministry who also love the show because it touches raw nerves that we all know so well. Thinking it was a completely niche show I was very pleasantly surprised to see it renewed for a second series, and then a third series.

The show is not without its detractors from within the Christian Church. A rather strange article yesterday in The Guardian by James Mumford declares that the show undermines the church with its outsider view masquerading as an insider view. He says: "Rev is an outsider's imaginative construction of an insider viewpoint – a secular take on the sacred."

Which is strange to me, because I would consider myself an insider within this Christian Church thing. I watch the TV show - with its depiction of an inner city parish and a stressed yet deeply compassionate Rev Adam Smallbone (played by Tom Hollander) juggling theological and liturgical differences, trying to balance work and family life, building teams from volunteers of all varieties - with complete empathy. Hence why, after watching season one, I was so amazed that others enjoyed it, because it spoke so directly to me and I assumed I would be in the minority as an insider. I just don't get where Mumford is coming from in his article.

As has been the topic in some previous posts here, Rev plays on the differences between generations. Adam, or "Vicarage" as his drug addict friend Colin calls him, is a Gen Xer with all the attendant doubts, uncertainties and capacity to balance seemingly irreconcilable differences. Mumford criticises the way the show depicted a request by a gay couple (friends of Adam's wife, Alex aka Mrs Vicarage (Olivia Colman)) to Adam to perform a marriage ceremony for them in the church. To my mind, the depiction of the dilemma in Adam to be pastorally supportive of this couple who loved each other and his attempts to stay true to the letter of the law of the church was perfect. It was great comedy, but it was also very real. Adam comes up with his own messy resolution in the show that rang all too true for those of us who feel called by the Spirit in a direction that the Kirk (or CofE) is still slowly deliberating.

I wonder how older generations find this show? For those who grew up with an expectation that their minister/vicar should have all the answers, should be a paragon of spirituality and holiness, should be an exemplar for everyone else, how does Adam fare?

It would be wrong to say that Adam plays a heroic role in my mind as I approach the show, but it would be true that his character is in some way reflective of the challenges that ministers of my generation face in ministry in the 21st century in the UK, and so I do see myself reflected in him more often than I perhaps should admit to. Some of these challenges are external, but others of them, and possibly the more powerful challenges, are internal. This is one of the reasons why the inner monologue we hear of Adam's prayer life is so important to this series.

In the final episode (spoilers!) when Adam has crashed mentally, physically and spiritually, in a bout of depression unable to leave his bed, it is to the words of Jesus that he clings: with tears running down his cheeks reciting to himself the beatitudes. There are times I have experienced where all certainties seem to flutter hither and thither and in those times I, like Adam, in faith reach out to Jesus. Not to theology, not to doctrine, but to Jesus. Ministers do struggle with depression, with dark nights of the soul, with feelings that the task of ministry is just so big, the need so overwhelming, the call on time and energy so endless, that crying "It is finished" may be the only relief available. At a recent meeting held in Ferryhill Parish Church by the Ministries Council we heard that the numbers of calls to the support phoneline that the Kirk runs through an outside agency (akin to the Samaritans, I suppose) for ministers and families of ministers has seen the number of calls rapidly increase latterly.

Yet, even through this, faith, hope and love remain. For ministry is also a great privilege, with opportunities to be with people in some of the most meaningful moments of their lives. It can be tremendously fulfilling and a source of great joy. In fact, in recent research published by The Cabinet Office here in the UK, the number one occupation for job satisfaction was... "clergy". So there you go. You know what to do if you want happiness in your working life!

What we were left with at the end of the third series of Rev was, for me, a sense that despite all the crap that happens, the call of God, once heard, rarely lets us go. Even as Adam entertains notions of becoming a human resources manager for a big company, he cannot help but feel that his call is elsewhere. Even Alex, Adam's wife who grumps and groans about how much the church demands of Adam, recognises that God is working through Adam in all his frailty and humanity as she organises a resurrection moment within the empty shell of St Saviour in the Marshes at the close of the show. Adam's faith and call is resurrected.

In these post-Easter Sundays we remember disparate groups of people who had come together because of one person - their Rabboni, their teacher, the one who showed them The Way and we acknowledge the image of a motley fearful crew gathered around the guttering light of diminishing hope in their grief and loss. We also remember that they began to understand that Jesus was still with them. They had a growing awareness that the Spirit of God was going to work through them to show people how to live together. It was transforming. We see the glimmers of that hope at the end of the TV show. Not that everything will return to the way it was, for it won't. Things are different. Things have changed. The disciples had to learn that too. And we follow in their path. Imaginative, daring, questioning, sometimes conflicted, always caring, adapting, pointing people along The Way.

All in all, I think it is probably best that Rev leaves us to imagine faithfully what would come next. For the show... and for us.

We have 192 guests and no members online