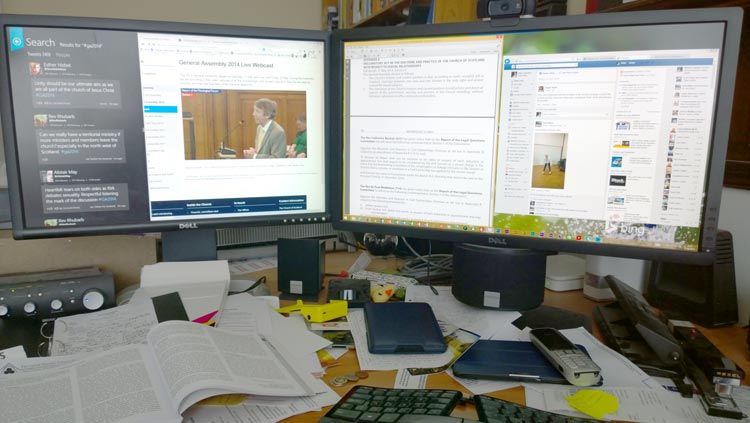 Last night I drove down to Edinburgh to meet with folks from the OneKirk Network for dinner, something of a tradition during the General Assembly week. I didn't think I would be able to make it but a meeting here in Aberdeen was cancelled and the evening freed up. It was an uneventful drive down, and I was very chuffed to make it all the way down to Kinross on one charge in the car (95 miles) though there was not a lot of electrical magic left in the battery when I got to the charger. Alas, the Edinburgh University charger was hopeless, but I had enough charge to get back to Kinross on my way home, so no great loss, though it did prove a late night by the time I got home after 3 a.m. It was a lovely night, however, and of course cost me £0 to get down there! Had to rub that in...

It was also good to talk to those who were commissioners at the GA. I have watched on and off, earlier in the week, the online coverage from the Assembly, but you don't always get a proper feel for the mood of the Assembly when watching from afar.

This was ahead of today's big debate taking place over the Theological Forum's report on the church operating as a 'mixed economy' and the Legal Questions Committee's 'Ministers and Deacons in Civil Partnerships Overture".

I watched most of today's debate from the comfort of the study, and thus was able to keep an eye on twitter streams, engage in discussion on facebook, have paperwork to hand and watch the online stream (see above). The GA is becoming a nerd's dream.

The morning discussion on the Theological Forum's report was graciously handled by Very Rev Prof Iain Torrance who dealt with some difficult and sometimes testy questions and comments with supreme patience and understanding. The report provided a means by which to see how the Kirk already does and could continue to operate as a 'mixed economy' within certain constraints and allow congregations that would wish to do so to set aside a traditionalist understanding of relationships in order to call a minister (or deacon) living in a civil partnership to serve their church.

At the moment this is not possible for any ministers/deacons who were not ordained or inducted before May 2009. In other words, no one new coming into the church.

In the afternoon the debate about the actual overture took place. Ultimately, the proposal by the Legal Questions Committee was carried convincingly (369 to 189) over a counter motion that would have seen the Kirk reverse tack and dig in with a traditionalist position. I was glad to see the Legal Questions Committee overture accepted, though it was tinged with regret that two of the ammendments to that overture (by Very Rev Dr Finlay Macdonald and Rev Dr Paul Middleton) were not accepted. Both of these in different ways would have made the process by which a Kirk Session can give a steer to a nominating committee easier. Finlay's by reducing the proposed two votes of a Kirk Session to one, and Paul's by allowing the decision of the Kirk Session to take place at any time, whereas the overture states it must only be during a period of vacancy.

This being said, it is undoubtedly a step forward towards a more inclusive church where there are opportunities for people in civil partnerships to serve as ministers and deacons.

I was very struck by something Rev Alan Hamilton, the Convenor of the Legal Questions Committee, said a couple of times in his report and responses to questions which was something along the lines of 'to be certain that you will not be accused of discrimination then the only way is not to discriminate'. It goes without saying that the overture agreed today does not go this far. It allows, under very strict controls, for Kirk Sessions to set aside the inherent discrimination of the traditionalist position, but it does not mean that the church might not face charges of discrimination in the future. This is untested ground at the moment. As I was watching the debate I wished for a church in which discrimination was not present, but alas we are not there at the moment, despite this big step.

The overture will now go to all presbyteries under the 'Barrier Act' for their assent or dissent and then it will return to the next General Assembly for final approval if a majority of presbyteries accept it. I am pretty confident that the Overture will pass this hurdle, though it may be quite close as smaller presbyteries have disproportionate influence under the Barrier Act. However, yet again the GA has rejected a pure 'traditionalist' position, the fourth time since 2009 and has adopted an overture that will allow for greater inclusivity than is currently the case.

It struck me and others watching the proceedings today that the majority, by a considerable margin, of speakers spoke in favour of a traditionalist viewpoint. Some of the folks I was chatting with during the debate were concerned about this. I was not concerned so much as I was very confident the LQC overture (in some form) would be accepted by the GA, but I was glad that those who were opposed had their say. The debate was not stifled.

Anyway, enough of my GA ramblings. Time to write a funeral service for tomorrow morning.

We have 45 guests and no members online