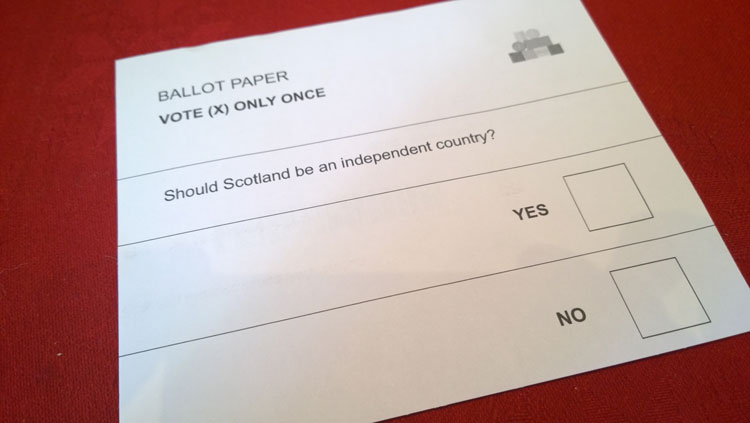 Some of us love bipolar questions that require only a simple Yes or No answer. Others of us become mired in a muddy valley of uncertainty inbetween the two poles when confronted with a question like that which is even now being addressed to residents in Scotland: "Should Scotland be an independent country?"

While the question is posed in the most simple terms, the issues that are raised in this simple question are undoubtedly complex. As much as one wants to educate oneself about the issues that are involved, whether in terms of the econony, the currency, social equity, defense, nuclear arms, EU membership, taxes, businesses, and so on, there is a limit to that understanding. Even professional economists give different opinions, so what hope for us mere mortals?

As many a psychologist will tell you, when you reach the limit of what is knowable or understandable (deciding with the head) then the heart takes over. And when that happens we tend to only seek out and absorb information that substantiates our previously held convictions - 'confirmation bias', as it is known. And, rather alarmingly, we tend to make decisions based on our heart much more frequently than we realise.

This is, undoubtedly, playing a major part in the run up to the referendum next week.

So what do I think and feel about it all?

As a point of disclosure, I have already voted: my ballot was posted the day I received it last week. No point in dithering around. I voted 'No'.

I know many people, good friends, who are very strongly Yes and others equally strongly No. And, like many, I am struggling with the division that this question is causing. I was at a meeting on Monday at which I felt very uncomfortable by a drip drip hectoring from friends who are Yes. For the first time in 22 years I felt a stranger within the place that I call home.

At the age of almost 44, I am almost exactly at the point at which I have spent half of my life living in England and half in Scotland. I love both countries and I owe much to both. I struggle deeply with any sense of nationalism that seeks to divide people against one another. For that reason I have never indicated my nationality on any form that requires it as anything other than British. This sense of shared identity has always been important to me. It has led to my ornery support for England in sporting events when in Scotland, and for Scotland when in England. I think it is part of an innate desire to build bridges and reconcile. That, or I like a kicking.

That is my heart bit, and why the thought of breaking away from a greater whole feels so disruptive and damaging. In a world in which borders and divisions are slowly being eroded, it seems counter-intuitive to me to create division.

I know that Scotland could be independent, there is no doubt about that, and if that is the way the referendum vote goes, I will do my bit as part of the Scottish community to help Scotland thrive as a new old nation in a rapidly changing world. But, a big part of my own identity will be lost, and I will grieve that loss.

The union between the nations of the UK, without wishing to dismiss the long history that has led to the present, does give us, quite unusually, a model by which to show the world how a mature democracy can work even across traditional boundaries. In chatting this weekend with Fanuel Blessings Mota from Malawi about the political situation in a very young democracy that is rife with abuse, I was reminded of how much we take for granted in our much-maligned political systems within the UK. We take it for granted, when it really is something that I find very hopeful (despite its shortcomings and its need for some reformation).

On the head side, I worry terribly about the financial impact of independence. I worry about how a balance can be maintained to make the country more socially equitable (a goal with which I have great sympathy) while still attracting inward investment by businesses. I am as much of a critic of the practices of multinational corporations as anyone, but I recognise that business is at the heart of financial development within a nation and that there is a fine line between attracting investment and the job creation that brings and raising taxes to pay for a large social apparatus. At the moment I cannot see how the sums will add up for an independent Scotland competing with a much more business-friendly England next door. I would rather try to have this argument as part of the bigger project of the UK than as an independent Scotland, as the affects would be more profound for more people if the delicate balance is successfully found (a work that will be continuous in its scope), and the likelihood of success greater in being able to negotiate as a larger bloc with corporations and businesses.

On both a head and heart question, I struggle with the debate over oil and gas. It is a rich gift, and when I am reminded of the injunction to be our brother's and sister's keeper, I struggle with the protective instinct of some in the Yes campaign to keep it all for ourselves. "It's mine!" For us to use that wealth to create a more socialist experiment north of the border will be at the expense of our brothers and sisters within England and Wales, and those in poorer areas, inevitably, who will feel increased pressure on their own social apparatus as a result of the reduction in income from oil revenues across the remainder of the UK.

I fully understand the desire for people to have a government for which they voted. Personally, I am in favour of reforms to national politics to bring about more proportional representation. Though I have to say I think the argument that Scotland does not have the government for which it voted is a rather bogus, short-term argument. Since the war, the majority of governments elected to Westminster have also had the mandate of the Scottish people. And even in an independent Scotland, I will be none the better off because, as a Lib Dem supporter, I am not any time soon going to have a government for which I voted. That is the nature of democracy.

Putting aside my own deep appreciation for the union of nations of which we are currently a part, and my worries (about which I have only scratched the surface here) of what going it alone would mean, I pray that we will be able to come through this divisive time in a way that allows everyone to maintain friendship and respect.

Part of the concerns of a close vote is that, in a sense, the uncertainty and doubts are only propagated by the feeling by a large minority that they have been hard done by. On the other hand, perhaps a close vote on the "No" side will force the United Kingdom to consider again necessary reforms to our current political system to bring it more into line as a modern democracy with a deep and long heritage.

Whatever the case, I will, as will many of us, be waiting with bated breath for the results as the counting takes place next Thursday night. Nothing will be the same, come what may.

I think what our current Moderator, Rt Rev John Chalmers, has been advocating in terms of reconciliation post-referendum is well worth reading. As part of a longer argument he points out the work of Collaborative Scotland:

The aim of Collaborative Scotland is to encourage people to listen to and respect the views of others, to choose language carefully and to engage constructively with one another as Scotland looks to the future. You can find out more at www.collaborativescotland.org but John Sturrock who is the energy behind this movement is right when he says, "If we behave with civility now, and look constructively at the ways in which we handle differences of view and difficult questions, we will prepare ourselves for what happens next".

The hopeful idea is that after the referendum both campaigns actively promote a positive, conciliatory agenda through social media following the announcement of the result. This is where much of the antagonism in the referendum debate has occurred so this is where much of the repair can be done. For example, both sides could agree a number of joint hashtags to promote magnanimity, a celebration of the process and cooperation. On a lighter note, what about supporters being encouraged to promote friendship and respect by taking a 'selfie' with someone who voted the opposite way.

We have 44 guests and no members online