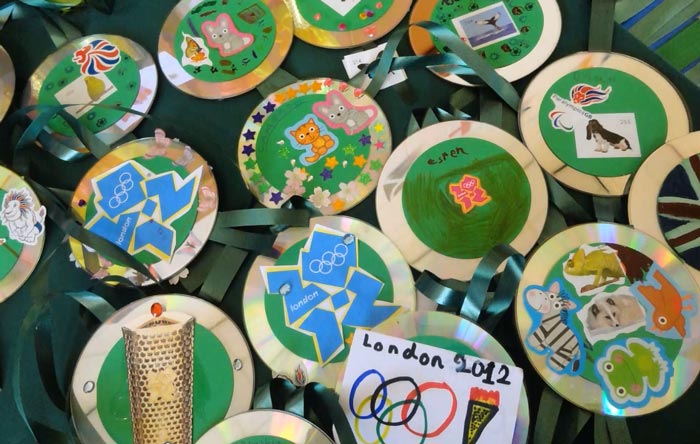 The Summer Club held their very own 'Ferryhill Olympics' from 6th - 12th August 2012.

An average of 62 children took part in warm-up exercises, games, singing, stories and crafts activities every day. Each child made a very colourful mascot, an Olympic torch, a beautiful medal and a decorated boat as well as doing lots of pictures and puzzles.

The Olympic motto is 'Higher, Faster, Stronger' and we reflected this in our 3 groups. The yellow group were the 'High Jumpers', the green group the 'Fast Runners' and the blue group the 'Strong Swimmers'.

On Thursday 9th everyone went on a trip to Aberdeen Sports Village where we were shown all the sports facilities and equipment used for different sports. We had our snack sitting in the stands of the stadium, a mini version of the Olympic stadium.

All week the children were participating in sports activities so on Saturday 11th they became an Olympic audience. Pam Wheatley came to visit, carrying in her own Olympic torch, greeted by cheers and shouts. She explained that she was nominated to be one of the official Olympic torch bearers because of her 25 years as a volunteer at Aberdeen Swimming for the Disabled. She shared her experiences of the Torch relay and let all the children hold the torch. The children then had a visit from Scotland's No. 1 and No. 2 fencing champions. They arrived in their Great Britain tracksuits and explained all about their equipment and clothing and answered a lot of very good questions from the children. They then gave a fencing demonstration. The children shouted their encouragement and cheered on the competitors.

The Sunday service was a joyous occasion which started with the Ferryhill Olympic opening ceremony followed by the children leading the worship and singing the songs they had learned.

The children were asked 'What do you think about the Summer Club?' Here are some of the answers -

I liked the crafts, the Olympic torches most - Cameron (aged 7)

I love seeing the adults getting soaked - Bethany (aged 7)

I liked drawing the mascots and Olympic things - Nandita (aged 7)

I liked everything in crafts - Arushi (aged 8)

Can't I go to Summer Club now, I can't wait till morning - Hannah (aged 7) at bedtime

Saturday was just like being at the real Olympics - Scott (aged 40 something!)

We have 20 guests and no members online