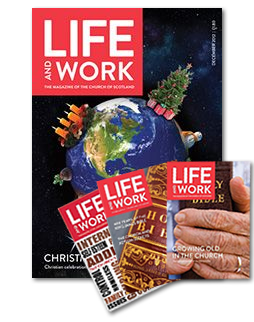 Life and Work, the monthly magazine of the Church of Scotland, gives up-to-date information about what is happening in the church nationally and worldwide. It is a bright, attractive and easy to read publication.

Life and Work was established in 1879 by Archibald Hamilton Charteris (1835 to 1908), who was professor of biblical criticism at Edinburgh University. The magazine was inspired by his work on the Church of Scotland's Committee of Christian Life & Work, which he initiated and led.

Hugely committed to Church causes, he later founded the Woman's Guild and the diaconate in order to harness the energies of women in the Church. He formed the diaconate from his experience of similar orders in protestant churches in Europe, where he travelled widely.

In its early years, Life and Work ran various supplements, including the Guild supplement and the Young Men's Supplement. The only one still running is the Gaelic Supplement, which was begun in 1880 and is read by Gaels all over the world. In its history, the Gaelic supplement has had only five editors, and is currently edited by the Rev Dr Roderick McLeod, minister of Cumlodden, Lochfyneside. Read about the Gaelic supplement here.

The magazine was voted best Member Magazine of the Year in 2004 at the PPA Scottish magazine awards and has been shortlisted many times since.

Life and Work was also awarded a prestigious Andrew Cross award in 2005 by the UK wide Churches Media Council.

The magazine’s own website was launched in the spring of 2013, as part of a digital development project approved by the General Assembly of the Church of Scotland.

Life and Work is the magazine of the Church of Scotland and is editorially independent.

You can buy a subscription online via this webpage - www.lifeandwork.org/subscribe

We have 171 guests and no members online