Ferryhill Parish Church is blessed to have some outstanding and beautiful stained glass, some dating from the church's earliest years, and others, such as the memorial window for the Piper Alpha disaster, more recent.

Please do read more about some of these windows below.

The Window of Unity 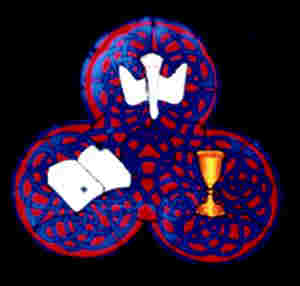 The window of  unity marks the union between the two former Ferryhill Church of Scotland  congregations (Ferryhill North and Ferryhill South) in 1990 and was designed and made for the Kirk Session by Jane Bayliss of Abbey Studio, Fintray, Aberdeenshire. Unusually  for a stained glass window, it is designed to be 'read'  from outside rather than inside. Situated as it is in the trefoil window above the main door of the Church, the symbolism of Descending Dove, open Bible and Chalice speaks to those passing under it of the purposes for which they enter a church, namely to worship God in spirit, centred on the word made flesh in Christ and in communion with God and with each other. The trefoil is itself a symbol of the Holy Trinity and the background of Celtic knots in rich blue and red speak respectively of the eternal dimension of God and of God's limitless love. 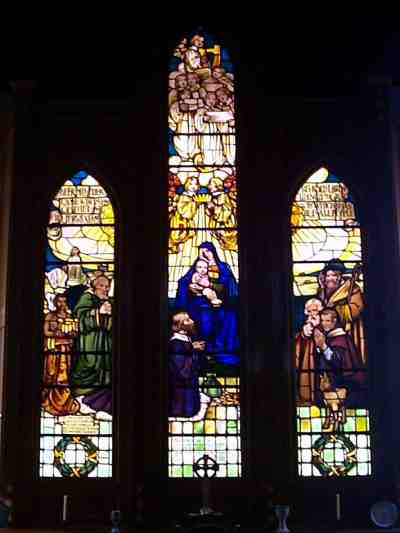 In 1903, Captain Watson, a ship owner and resident of Caledonian Place, died and bequeathed the sum of £100 to the church to provide an ornamental glass window in memory of his wife Elizabeth who had predeceased him. Four Aberdeen glaziers were invited to submit designs, the successful firm being Messrs Gordon and Watt. The new window, depicting a Nativity scene from which Joseph appears to have been excused, was in place in the south transept of what was originally Ferryhill Parish Church and latterly Ferryhill North Parish Church by October 1904. When the two Ferryhill Parishes were united in 1990 the window was re-installed as the main feature of the apse in the present Ferryhill Parish Church. 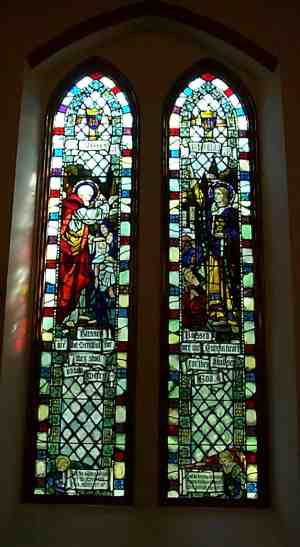 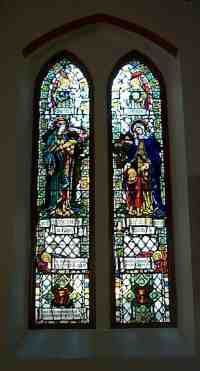 January 25th 1925 saw the setting in place of three stained glass windows given by Dr Wright, the first minister of Ferryhill Parish Church, as a tribute to his late wife, plus a further two donated by his sister-in-law dedicated to his own memory. The congregation contributed to the cost of a memorial plaque to the old minister and this was placed in the church vestibule.

All the windows and the plaque are now to be seen in the present Ferryhill Parish Church.

The window dedicated to Mrs Wright depicts Martha, Dorcas and St Margaret of Scotland and can be seen on the east side of the nave and in the east transept. The window in memory of Dr Wright shows St Peter and St John and is on the opposite (west) side of the nave. These five windows are very different in style and execution from the Nativity Window that had been installed earlier and can now be seen in the apse of the present church. The memorial windows were the work of Alexander McLundie who at that time ran the Abbey Studio in Glasgow. They are much admired, and specialists in the field have been inclined to attribute them to a very distinguished artist in stained glass, Margaret Chilton. Enquiries have uncovered the fact that although Miss Chilton spent most of her career in Edinburgh, she was employed from 1918 to 1921 by Alexander McLundie in Glasgow. The Ferryhill windows came a few years later but may well incorporate some of the designs she produced while working at the Abbey Studio.

The memorial plaque to Dr Wright is now in the Memorial Chapel.

The window commemorates Joan (1924-94) and Archie Steele (1923-95) and was gifted by their three children, Patricia, Richard and David and dedicated in May 1999.  Joan and Archie were both elders, Archie being appointed  Session Clerk in 1974, a post he still held at the time of his death.  Joan spearheaded a number of fund raising events and was President of the Woman's Guild when she died in August 1994.

Based on the fact that Archie and Joan were both teachers, the design expresses humankind's irrepressible search for knowledge.

The figures represent Adam and Eve, with Eve stretching up to pick from the tree of knowledge.  Knowledge takes away innocence and brings with it the responsibility to choose between good and evil.   The ability to discern good requires knowledge of God and of God's will, hence the text from Psalm 111:  The fear of the Lord is the beginning of wisdom, and they who live by it grow in understanding.  The first part of this quotation is, of course, the motto of the University of Aberdeen of which Archie and Joan were both graduates (Initium sapientiae timor domini).   It is rendered here in Scots to reflect both Archie and Joan's literary interests and in particular their love of their native land and its tongue. The height o' what's wyss, is the dread o' the Lord; heedfu' guid's wi guid-warkers a'.  The figures themselves reflect the close relationship that was Archie and Joan's life together ('The two shall become one flesh') and of how they were always thought of by others as a close partnership, unable to think of one without the other.

The evergreen ivy is a symbol of everlasting life and expresses the intertwining of the eternal with the temporal.

The border around the window shows communion cups of wine and rounds of bread, reflecting the fact that Archie and Joan were both elders and served Communion to the congregation.  For many years Archie was also responsible for purchasing the wine and preparing the bread.  It is inevitable, and wholly appropriate, that many will see the bread symbols as rounds of Joan's delicious and unrivalled short-bread for which she had a deservedly legendary reputation!

The colours of the window and the lines of construction have been designed to complement the Piper Alpha Window (also designed by Jane Bayliss, of Abbey Studio Fintray, Aberdeenshire) alongside which it now stands in the Memorial Chapel. The combination of blues, greens and reds in the upper part of the window are particularly stunning while the flowing glazing lines have the effect of carrying the eye upwards in the same way as in the Piper Alpha window.

In 1988 an explosion on Occidental's Piper Alpha platform in the North Sea led to the loss of many lives. The Occidental Company held a memorial service in Ferryhill Parish Church. The congregation included Jennifer Jane Bayliss, a stained glass artist based at Fintray, near Aberdeen. Her husband was employed by Occidental at the time. She offered to create a memorial window, which was in due course dedicated by the Moderator of the General Assembly of the Church of Scotland, Dr James Simpson.

Near the foot of the window the words "Lest we forget" are surmounted by an oil platform. The border of the window represents the material used to form handrails on the platform. Vertical lines are reminiscent of the design of an oil pipeline. Each of the small circular discs represents a victim of the disaster. At the foot of the window they are red, as the souls of the dead emerge from the flames in the stormy sea. As they rise up the window the colour lightens until they become clear at the top, signifying that they have reached the purifying environment of heaven. 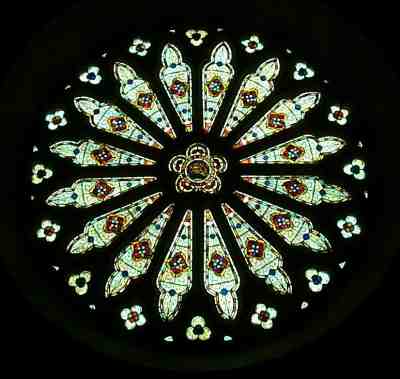 The Rose Window was installed in 1883 (nine years after the church was completed) and was the gift of James Morrison of Rotunda Cottage (27 Polmuir Road) who had been the kirk's first Treasurer. 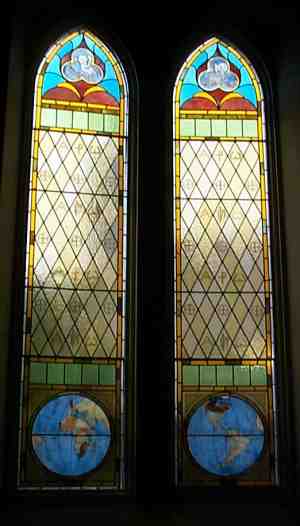 The Four Evangelists are depicted in the windows in the apse which were given by an anonymous donor in the late 19th century.  At the top of each is the symbol for each gospel writer: the lion for Matthew, the man for Mark, the ox for Luke and the eagle for John. The diamond shapes of the main part of the window are patterned with crosses, the Greek letters Alpha and Omega (Aw), the first and last letters of the Greek alphabet, and Chi Rho (Cr) and IHV monograms, all of which are Christ symbols.  In the Revelation of John, Christ is described as the Alpha and the Omega, the beginning and the end. C and r are the first two letters in the Greek word for Christ, CristoV (Christos) and IHS stands for the Latin Iesus Hominum Salvator (Jesus Saviour of Mankind) or In Hoc Signo (Vinces) [in this sign (you shall conquer)]  or In Hoc(Cruce) Salus [in this (cross) salvation].

In the lower part of each window are globe-shaped maps showing the political geography of the world in the late nineteenth century. These remind worshippers of the world that God loved so much and which Christ came to save.

You can give securely to support the work of Ferryhill Parish Church, just click below to go to a secure Church of Scotland site that will allow your donation to Ferryhill. 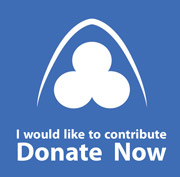 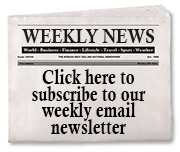 We have 206 guests and no members online